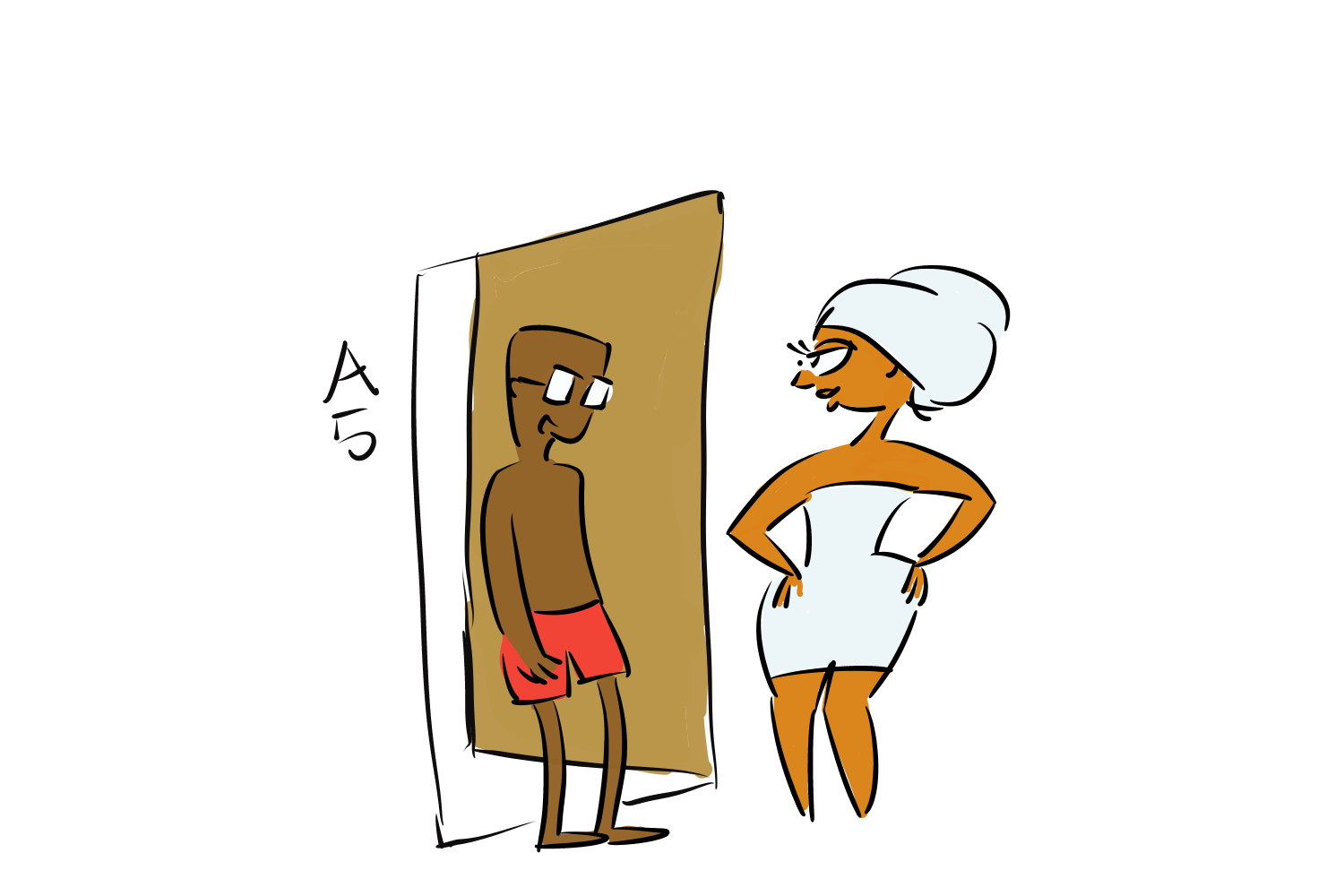 One thing you don’t like to see first thing when you get out of the house in the morning is your landlord. Why? It just doesn’t sit well with me, the idea of the landlord living in the same block of flats. It’s like injustice. How come he doesn’t have to pay rent and all the rest of us do?

But my landlord is not the usual type. He’s a jovial middle aged man deep in the throes of a midlife crisis. He wears Yankee fitted caps with his agbada, blasts Vanilla Ice and MC Hammer music out of his black Prado and sleeps around, as the saying goes, “with these bugirls you see.”

Seeing Big Ssu in the flats is not an unusual thing since Frejrick left.

That’s what he said when we asked him his name so that’s him: Frejrick.

Not a word did he say until the sixth month when he showed up with a pair of dogs and two heavy-set drug addicts and informed Frejrick that everything in the flat was now property of Ssuna Investments limited in lieu of rent arrears.

So now he has a hoe pad in our block. It’s where he brings his bugirls.

The other part is what surprised me– seeing my airtime vendor come out of Number 4 at nine am.

And now the dialogue portion of this post begins. Zig.

Anita: I have been having seksho intercourse in one of these frats. Unfortunately, even though the patina lemembered to buy condoms, he did not buy l toospaste. So hook a sister up.

Me: Anita, when you first sent me into the uncle-zone, I went peacefully and without causing a scene. But you can’t stand here in a towel like that and expect me to accept you as a sister.

Me: (Pointing way to bathroom) You know what’s funny? This is one of those typical Kampala flats where neighbours don’t socialize. I don’t know them, they don’t know me. In fact the only person I know is Big Ssu, when he brings his bustrays to number 4.

Anita: Yeah. Dat’s da one. I knocked him out. My hips don’t rie. It’s the truth da whole truth and what daf frying ff… what is this?

For at this point, Anita has entered the bathroom, and, in looking for the toothpaste, has opened my bathroom drawer and is going through my stuff.

Me: I swear I can explain.

Anita: A whole man, a highry lespected pirra of society rike you? How can you? You are emballassment to yourself and to da entire communntie!

Me: I woke up one day and was out of decent rollon. The nearest shop didn’t have any other kind, so what could I do? I had to buy that cheap oily crap rollon. Did you want me to move around smelling?

Anita: I would lather smell of kavubuka than smell of lousy deodolant. And orso you wouldn’t even have that probrem.

Me: Are you saying I naturally smell nice?

Anita: I am saying, Anko, you are old. You can’t smell of kavubuka. You will have kazeeyi.

Now, at this point you have me standing there. I’m my boxers. Because it’s my home and I wear what I want and all I ever really want to wear is my boxers. Kiliza oba gaana, hate or relate.

Then you have Anita, wrapped in just a towel, brushing her teeth in my bathroom.

What do you expect happens next?

Let me give you a few seconds to expect the wrong thing.

No, what happens is the girlfriend shows up.

Okay. Let me come and we continue.