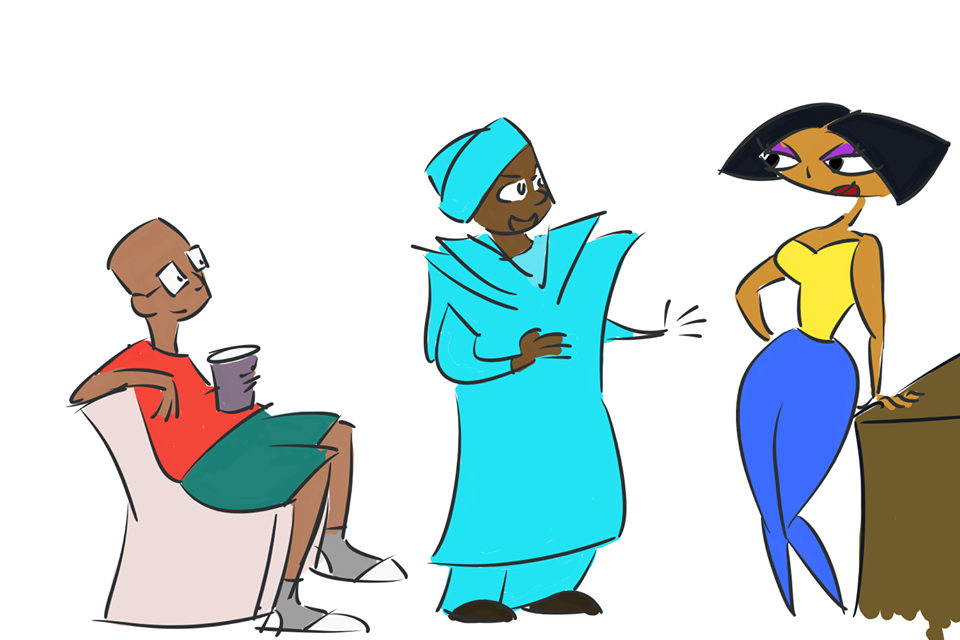 Previously on Anita Everything, a fat thick huge obnoxious Prado comes to a screeching halt at the edge of Anita’s airtime stall. Which is now also a coffee kiosk.

Big Ssu is my landlord. I would call him a friend except for two things. First of all, he’s not the sort of person you want to be associated with in public. He is very very corrupt. He is possibly the most corrupt Ugandan not working for government. This guy has a fully valid driver’s license, but he would rather bribe the police than spend the energy looking for it in his agbada. Yeah. he wears oversized agbadas all the time. That’s why we call him big. And his name is Ssuna, that’s why he is called Ssu.

Second of all, your landlord is like your ex. You can never be just friends.

Big Ssu: Do you have airtime for the Iphone X?

Anita: What is the iPhoneX?

Big Ssu: It is the most expensive phone in the world.

Anita: Ooh, that one. I always called it the eefoncks. But that is because I am not formarry eduated. I only have nacho interrigence. Yes, Oga. I have airtime for your eefoncks.

Anita: As I said, I have natural interrigence. So I will call it the eefoncks. Let me get that airtime for you.

Me: (I was there at the time. Just chilling sipping coffee from Kanungu, best I ever had. Eyaya. Kanungu can germinate a bean! I even spilled a drop on the ground and said RIP the homie gorillas that have passed on) Sup Big Ssu.

Big Ssu: Baz, I can’t see you, shurrup, because this woman is too hot. But what’s your name? You are fine as wine, in the sunshine, all the others can go to the back of the line because you are geometrically the sine and the cosine, whoever they assign to design your bassline, was an Einstein. Surely you should be mine. Here. Don’t just load airtime on the phone, load your number in as well.

Me: Wait. Big Ssu. You are a middle aged man. Why are you vibing young girls like Anita?

Big Ssu: Two reasons. The money I have and the damns to give that I don’t.

Anita: Here you go. I have roaded our eefoncks airtime. But that means now I have no more airtime to sell. You know I usually stock for the simple cheap china phones of these Bulabira scrubs, like Baz here.

Me: Excuse you Snobby Wine. This is a Huawei P9. Octocore engine, Android N, and enough memory for every decent album Jay-Z ever put out. Meaning I can’t store anything he made after Kingdom Come.

Anita: Okay, some offense but not too much.

Me: That’s better. Now, thank you for the coffee, I shall now be on my way. Big Ssu, see you later.

Next episode: What shocking thing I saw later. Cliffhanger! Tententeeennnnn!