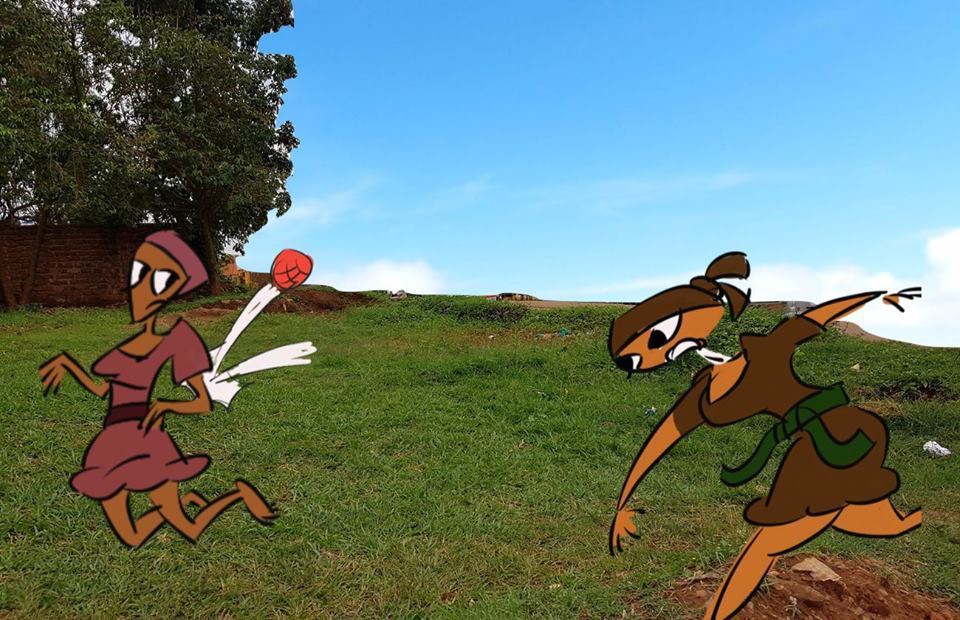 Now, this is how the suburb of Bulabira was laid out, for those of you who are unfamiliar with how every single Kampala suburb is laid out. We have the trading centre here. It is a string of shops each selling the same stuff. Stale cakes, sachet liquor, mosquito coils, soda, katunda lager and groudnuts. Then we have the boda stage. We also have the airtime stall. Then the rolex guys, roughly eight of them. Two smell more than the food they cook and yet they still come back every evening wondering why no one buys their rollas and blaming the government for destroying the economy.

Beyond the trading centre there are dirt paths that snake down or uphill to blocks of newly-built flats.

The landlord of one of these blocks of flats is known as Big Ssu.

He is not big. And like the late great singer said, His Name Is Not Susan.

Ssuna just likes to wear agbadas. Big flapping agbadas which puff and bluster around him like the sails of a pirate ship in a movie. You almost expect Johnny Depp and a monkey to emerge from one of his armpits.

Big Ssu is average height. Which means he is as short as I am. But he does everything in large sizes. His agbadas are oversized, his voice, his car… Well, let me tell you how it happened as we enter Dialogue Mode.

Anita: What the frying ffff… Dooshobaga! Just because the inside of the car is Japanesey, you think the outside is arso Tokyo? You forget that outside it is is the same Kampala of dust and murram? Next time I am going to keep a sack of tomatoes here.

Anita: Next time such a veyko pass by zooming and raising dust, I will show dem why I was know as Deadshot in da Ggwa District Kwepena league.

Me: Anita, I want airtime. I don’t want complaining and whining.

Anita: Who does he sink he is anyway? (Scratching the airtime card as if she has a grudge against it as well.)

Me: I don’t participate in kaboozi when I have not yet had morning coffee.

Anita: Here (Producing, from behind the stand, the last thing I expected. She takes a french press ((If you know what a french press is, know why I was doubly shocked)) a ceramic mug and a bag of Kanungu’s finest grounds and proceeds to brew the best Tiwa Halle Toni Winnie Savage Berry Braxton Nwagi cup of coffee ever. Yeah. Now I’m fuelled up, I can debrief her.)

Me: That’s Big Ssu. He owns the block of flats I live in.

Anita: He is your rand road?

Me: If only he was just that….

(Cue memory flashback. I am at home, and the door has been suffering repeated knocks for a minute)

Me: (Grumbling at door) I hate it when people wake me up early in the morning. Who is knocking on my door at 10:40am?

Big Ssu: You are lazier than a bag of wet socks. Get up. It is your landlord and I have come for the rent. Let me play the clip of the song I downloaded on my phone for such situations.

Rihanna: Pay me what you owe me! Brah Brah brah!

Self: Go away, lumpen fiasco…

Big Ssu: Since when does a tenant say that to a landlord at the end of the month?

Self: Me. I pay rent so that I can have a place to rest, but if you come here with your hooves slapping at the wood making it impossible to sleep, you are deliberately curtailing the freedom to use these facilities for the purpose I paid for, which makes the transaction void. If I don’t rest, I don’t pay. I am going back to my nap. I will send you your money if and when I agree with myself to wake up.

Big Ssu: Come on, Baz, I really need money. I have to get the new iPhone.

Self: Weren’t you cut off by NIRA for not registering?

Big Ssu: That’s another reason I need rent from you people. A Congolese smuggler who used falsified documents to get a national ID used the same ID to get a registered line then left me the phone. Now he’s gone back to the Congo but the law is after him, by which I mean, if you have been following the story, I need to pay some bribes.

Self: Okay, I will pay you now. But on the condition that you stop perpetuating the culture of corruption that undermines this nation’s economic growth.

Big Ssu: I promise. After all, breaking promises is part of corruption.

(Flash Forward to the present, or whatever time you are reading this post.)

Anita: Here he comes again. That big fat Plado raising dust. Do you have a tomato to rend me?

Me: (Too busy gulping down the coffee so I can get it done before the dust comes and a: contaminate the coffee and b: because I won’t be able to breath when the dust arrives and breathing is part of swallowing.)

(We expect the car to zoom past, but instead it screeeeeeches and comes to a braking stop right in front of the airtime stall and Big Ssu pops his head out of the window.)

Big Ssu: Hello, Nakabuyairtime. Do you have the airtime for an iPhone X?

Next episode. Big Ssu vs Anita.