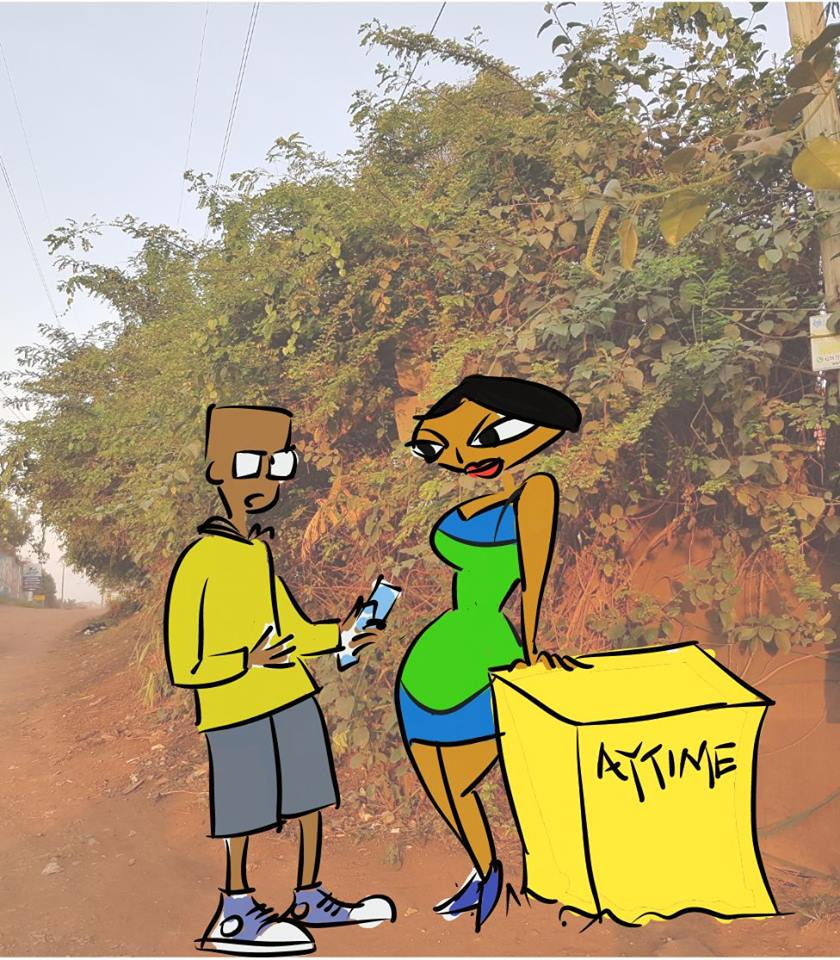 I remember the first time I ever laid eyes on Anita. She was wearing an apron with the logo and in the colours of one telecom company while selling the airtime of another company.

She struggled to stay seated on a small stool which every observer could instantly see, was too small for all that hip she had.

I took one look at her and thought to myself, “Hot Shibbidy, this girl faaaayayaain!” .

And then I took one smell at her and thought, “Eh! Which village is this one from?”

Those of us with economic privilege and Facebook accounts all know that villagers smell very rural. They smell of a mix of earth, unprocessed milk, damp hair and ganja.

So, noting that this was a country bumpkin fresh off the boat, I did what any typical Kampalan would do: I prepared to kufela the chick.

I took a deep breath and closed my eyes. Everyone knows that before one attempts kulefaring one has to center ones chi. So I did like Danny Rand in Iron Fist and waved my hands around as if shaking hands with various mosquitoes while standing on one leg.

Then I stomped up to Anita, and barked,

Me: Give me ten thousand airtime. Hurry up. I don’t have time! (You have to be assertive when you are conning people. Ask anyone who has ever conned you.)

Anita: (Smiling in that way people with good customer service smile at you, that way that makes you think they care about your happiness and legitimately hope you are having a nice day) Should I squach it?

Me: I don’t have time! You just bring!

Me: (After snatching the card away from her. Was 10k a card? I don’t remember. It had been a while since I bought airtime. Even before they banned use of scratch cards, I was already on unlimited data because real men use WhatsApp. Calling is for punks). Take! (And I tossed five thousand shillings at her and began to leave) .

Me: What is wrong with you are you serious how come since when all as one question? Everyone knows about the promotion where members get fifty percent discount. What’s wrong with you?

Anita: Anko. May I call you Anko? I am twenty years old, so I call people with grey hair Anko. Anko, you are very funny. You should have a newspaper corumn with your humour, or even a brog. Mbu fifty percent. Hahhah. You know we have a saying in my home village of Ggwa. We say, “Just because you see a frog, it doesn’t mean there is water in the river. It might have come from someone’s septic tank.”

Me: There are septic tanks in Ggwa? I thought that place was underdeveloped.

Anita: We are not too underdeveroped to shit so we have septic tanks. Anyway sit down and let’s talk about your options.

Me, trying to maintain character: I don’t have time!

Anita: Sit down. This is an airtime stall, Anko, which means it is very easy for me to make a phone corr. Like, for example, a corr to porice emergency. I could have Affande Mande, the rocal psycho cop, here in a minute. I may be new to the hood but I have heard that Afande Mande suffers a panic attack if he goes 12 hours without firing his rifle.

Secondly, I can see from the rook on your face that you are not leally a bad person. I see that you are full of warmth, kindness and compassion. Or at least cowardice. They look like the same thing. Either way, you are essentially harmress.

Me: (Going down faster than Golola Moses in the ring against a Hungarian) But I am wearing glasses. They are supposed to mask it. But you are right. I don’t have the balls for actual crime. I don’t know what came over me, I have no idea what made me act like that.

Anita: I forgive you. Tis olight. Tis olight. Here is your two thousand shillings of airtime. I will see you tomorrow, okay?

She looked confused. It seems she hasn’t seen enough movies to know that people do that when they are walking away after an emotional moment.

But wait. She gave me Two K! I gave her five thousand!