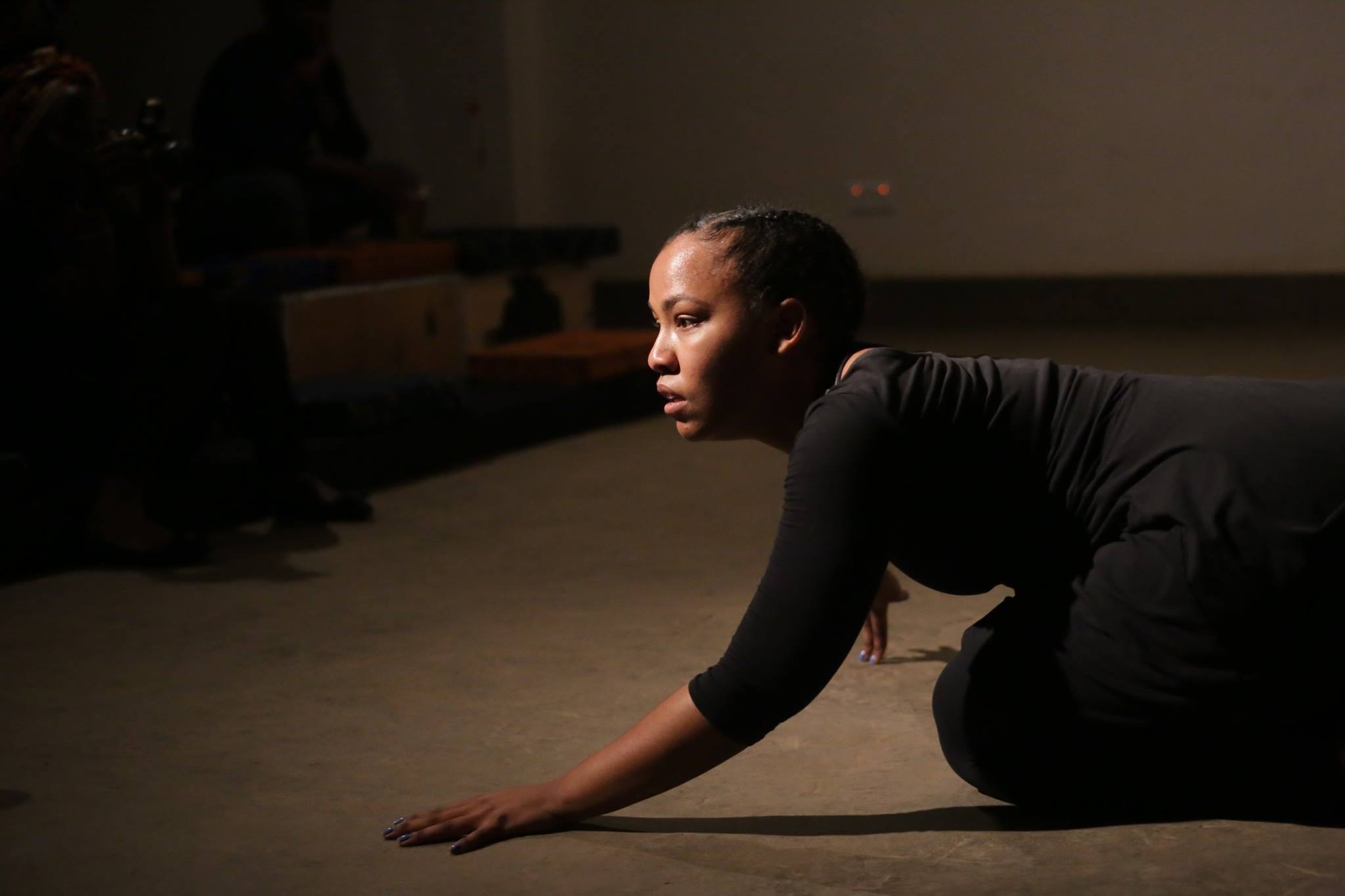 At the Writivism Festival this year, we had the opportunity of watching Kemiyondo Coutinho’s phenomenal Kawuna…You’re it!, a one woman play exploring the theme of HIV and AIDS and some of its devastating effects. The play was chosen to be a part of a New York Global Spotlight Reading with Hybrid Works and was selected to be a part of the Main Programme at the National Arts Festival in South Africa.
It tells three stories; a child left behind because of HIV, an ex-rebel soldier who contracted HIV during war, and an elite woman who contracts HIV within her marriage. The play includes raw footage from interviews with women in Uganda affected by the disease, which gives a direct address from the women of Uganda to its audience. I recently had the chance to sit down and talk to Kemi about Kawuna…You’re it!, its general reception and Kemi’s future plans.

Kawuna was breathtaking. I was absolutely captivated by your performance. What inspired the topic and theme?

Both my parents’ work revolves around HIV and AIDS. My dad is an HIV/AIDS specialist and my mother works with vulnerable children. So I guess I always grew up with the statistics. I remember statistics particularly because of Swaziland: one out three people have HIV. It always felt like numbers – so foreign. It felt like science; never personal. But growing up, I saw so many of my uncles and aunties pass away but of course they didn’t tell us what it was. I remember finding out and I was like, “there’s no way that’s what took her!”, even though I’d grown up knowing about it. I realised I had all these stereotypes – poor, woman, uneducated: these are the people that actually get HIV, because of broken systems and all. But there are so many other factors involved. So I realised I needed to get stories; personal experiences, because I feel like stories capture everything without you even knowing. Stories are a reflection of us, of our humanity.

Throughout the play there are scenes from interviews you said you had with some women living with HIV. How did you manage to get them to open up? Especially considering the stigma attached to the condition here in Uganda.

What I’ve noticed is not many people listen to people. People ask questions like, “‘What’s your viral load’, ‘How is the treatment going?’” I’d just go and ask, “How are you?” or “What are you currently working on?” I’d ask very personal questions. And you’ll be shocked, they would want to open up. And that’s something I’ve learnt; people actually want to tell their story, and often we think they won’t open up but once those women started talking, they started talking. Yes, some of course might start off with one word here and there, but there’s always a hook, and for a lot of them it was the children. And that’s why I figured with the Pastor’s wife it was the child that was going to break her. 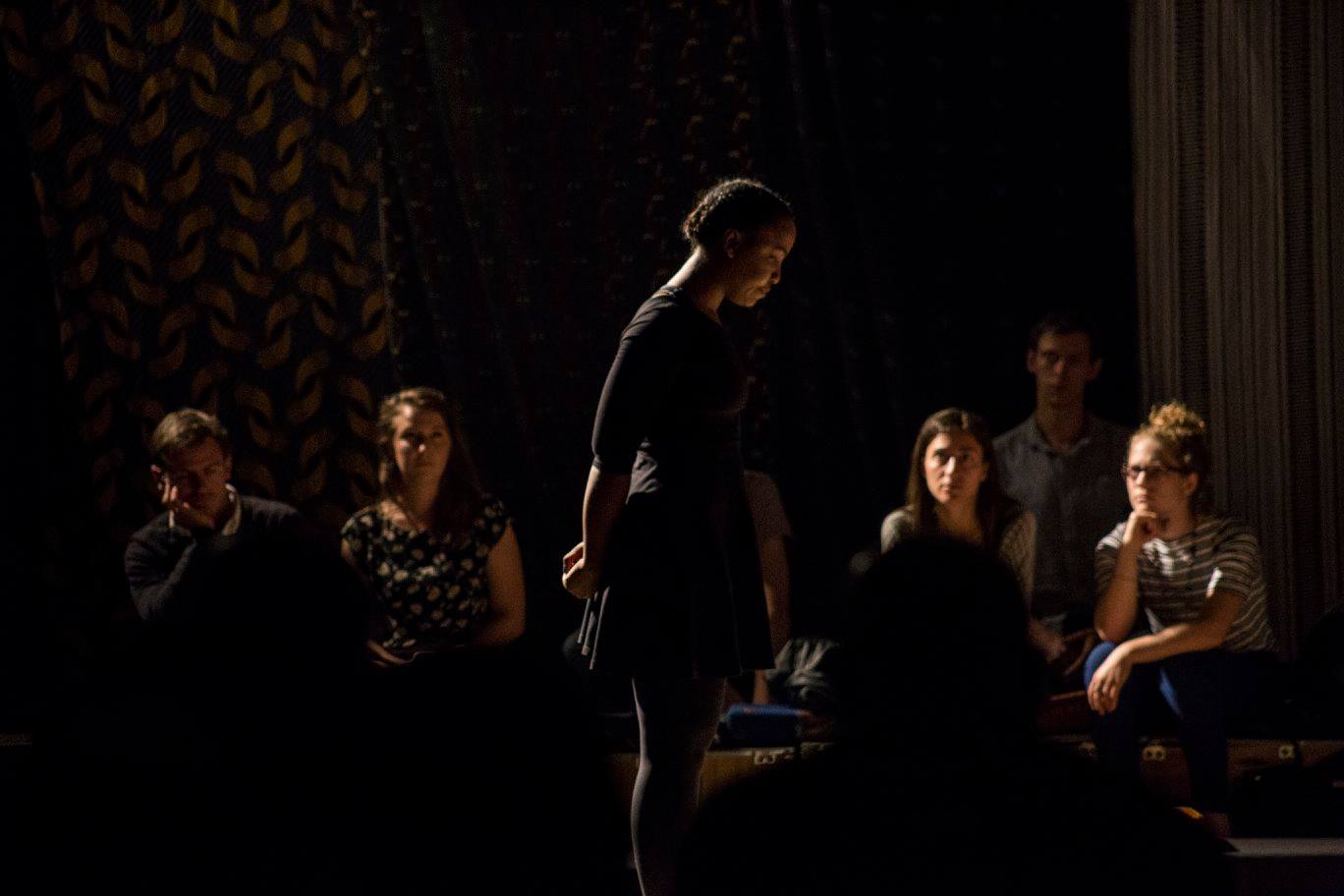 How are you able to switch so quickly from one character to another? Especially when the emotions of the characters are wildly different?

I do a lot of chakra warm-ups. What Chakra does, is it opens you up to all sorts of emotions. It opens you up to anger, hurt, pain. So when I switch to say, Super Wendy, I can access joy instantly because I’m open. Or when I go to Adong, blowing the balloon which signifies rape, I can access pain instantly. So I don’t have to work so hard towards it on stage. Now that takes a lot of training, so for about three years I trained on how to be able to access these parts of me but I do think it’s a gift of mine in particular too. As a kid, just like Super Wendy, oh! I was really imaginative. And  for morbid situations? I’d imagine people’s funerals. I don’t know what was wrong with me (laughs). Or I’d imagine a guy I like liking me back – this one I still do sometimes (laughs). I just have a wild imagination. So I think in some ways I’m able to suspend disbelief very fast.
The thing is though, the mind understands this is theatre – that this isn’t really happening to you – but the body doesn’t, because the body actually cries, actually experiences joy. Those emotions I feel on the stage, despite the fact that I am acting, are not accessed from memory or whatever. They are real to the situation I am acting out, so by the end of the show my body feels like it has gone through so much, but the mind doesn’t. It’s a very disconnected feeling, and that’s why after Kawuna I always have a dip, and indeed, that Monday? I cried and cried and cried the whole day, because the body is telling the mind you’re sad, the mind is telling the body no you’re not, this didn’t really happen. So I dip until I find my balance again.

What inspired the little containers with props around the stage?

Medicine jars! And the idea that we associate HIV with taking medicine. It was actually my director’s idea. We got different types of jars and put the missing parts of the story in. 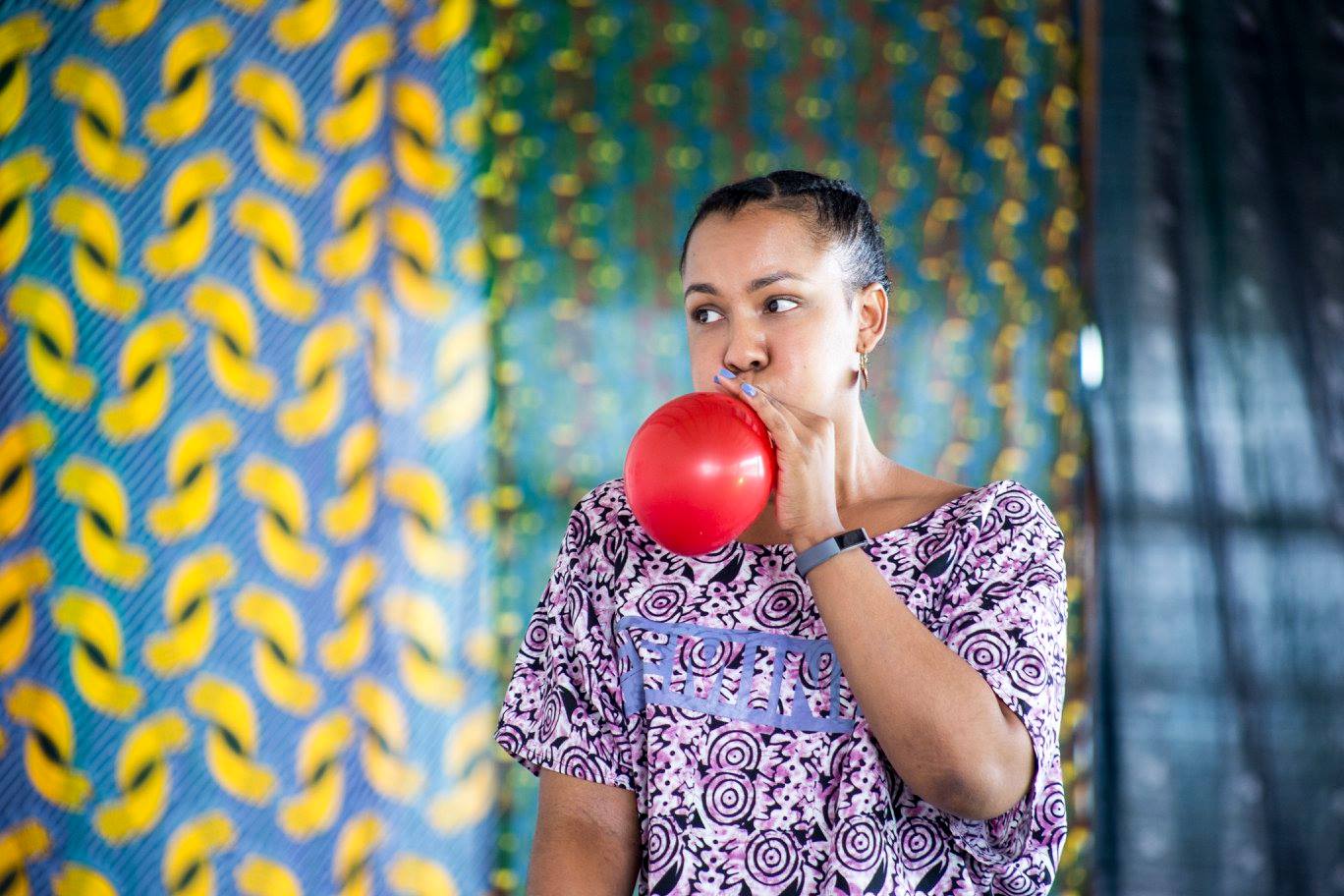 During the interview after the show you mentioned wanting to turn Kawuna into a TV series. Any actors/actresses you would see yourself working with?

So the thing about one-woman shows is you don’t have to fit the characters, in the sense that I don’t look like a rebel child-soldier for example, or a five-year-old child. So I wouldn’t cast me in any of those roles. But I want these stories to be experienced in that way. I want to write and possibly direct the series. I would love to cast someone like Ann Kansiime as the lady who married the pastor, because I think she’s so funny and I would love to see her do a serious role. But also, I think that character has a humorous take which she would fit perfectly. And then I’d love to see one of my students as Adong, the child-soldier. Her name is Gladys Oyimbot.

How does it feel having to trust other people and their interpretations with your play? Does that make you anxious?

No, I guess because I am an actor as well, I’m able to give things away because I know the importance of receiving them in their entirety. So I also believe, they can bring something to that character that I haven’t seen because of their own experiences and views. I think I’d be more excited than anxious. I think the characters can live beyond me. 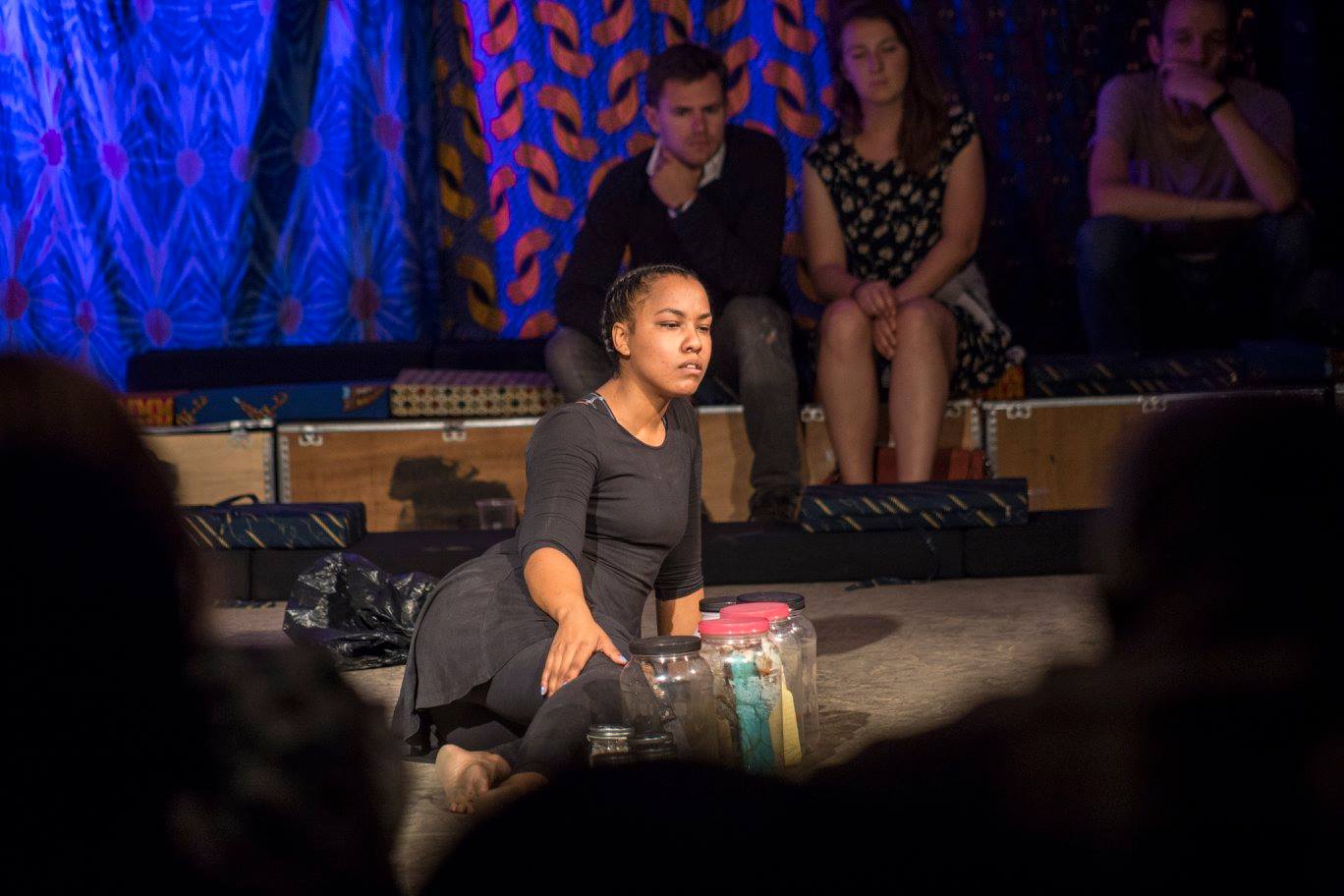 What other forms of art are you curious about as an ARTrepreneur?

I act, I write, I direct, I produce, I just started editing. I’m interested in curating art events like AKaDope. I really want to put on a Ugandan musical and I don’t know where that came from. I think maybe mixing music and theatre. It would be very expensive, but it’s something I want to do when I’m rich and famous. I’m very interested in many things, but I’d say mostly it’s storytelling in whatever form it comes. Whether it’s through writing or acting or directing or music videos or a concert, I find beauty in telling a story. It’s evident even in the way AKaDope is structured. With seasons and episodes, it’s this idea that there’s a flow and you’re going to go through different seasons just like a television show.

You recently did a performance workshop for musicians will you be doing others for other kind of performers?

Yes! I used to teach a free acting class every week last year, but then finances…and then I’ve taught intensive acting workshops at Kampala International Theatre Festival (KITF) and then I taught a singing workshop at Doa Doa and then this was one I just did again with other artists. I’d love to do one with poets because I see poets performing poetry the way they think they are supposed to be performing poetry, like everyone’s shouting and I’m like why are you shouting, like that won’t make me hear your words better? So yes, I’d love to help improve that performance area as well.

Are you exploring other acting avenues here in Uganda, or are you solely focused on being an ARTreprenuer now?

I’m moving back to the States actually, in November. So this was my last show in Uganda, but I think I’ll come back and do something for World AIDS day. But AKaDope will continue! I’ve established an awesome team so the show must go on.

So will you going back to the US as an actress or ARTprenuer?

That’s actually something I’m very scared about because Uganda allows you to be an ARTrepreneur and that’s something that the US didn’t allow me to be, because the US demands you be just one thing. Even just to say I am an actress and writer they are like, ‘Oh, you can’t be both.’ And I’m like actually, ‘I can and I am and I’m good at both.’ So now to add other things like directing and producing, it’s like ‘typical L.A. girl’. So I think that’s something I’m actually very nervous about. Key to my identity is the fact that I just get bored, I need to be doing a lot of things. It worries me. So that’s going to be my challenge, staying true to that aspect of my identity. Also, my situation is different now, in terms of immigration, now I have my green card, so I am going to push!

Unexpectedly supportive. I think the response from non-artistes was very supportive. From artistes, it was very sad. Very few came through. Very few actors, very few AKaDope artistes, and to me that was a little surprising, like, ‘Wait guys? You should support other art.’ But I think theatre has this boring reputation for some reason? Anyway, from the normal people and the writers it was a great reception but I’d hoped there would be more artists.
There is also a need for more professionalism. Like the fact that I had to perform while people were laughing on the other side of the balcony, that would never happen elsewhere. Someone would get up and tell them to keep quiet, but we accept it for some reason. And they know there’s a show, but they don’t care! That was a little interesting.
But all in all, I was very happy with the response. The audience I got was beautiful. I just wish artists from other sectors of art could have come.

The phenomenon that is Kemiyondo Coutinho, ladies and gentlemen!

This Sunday, A Ka Dope will be celebrating one year since they started. congratulations Kemi and the A Ka Dope team. More dopeness in the years to come!