Kyenvu is a short film by actress and writer Kemiyondo Coutinho. We first had a chance to chat about her one woman play Kawuna…You’re it, which you can read about here. Part of the Sooo Many Stories team was invited for a private screening of the much anticipated Kyenvu, a short film by Kemiyondo, and we left feeling a whole katogo of emotions. We were awed, amused and devastated all in one breath.

First Of all: Major spoilers. If you want to first watch the film and come back to this review, it’s okay. We’ll be here.

The film documents the experience of a young woman in typical Kampala. It seems to be a love story up until the end when the main character is raped. Nyana Kakoma, Esi Nshakira and Dushiime Kaguliro (who has not watched the film. We just wanted to torture her) sat down to review and discuss the film. 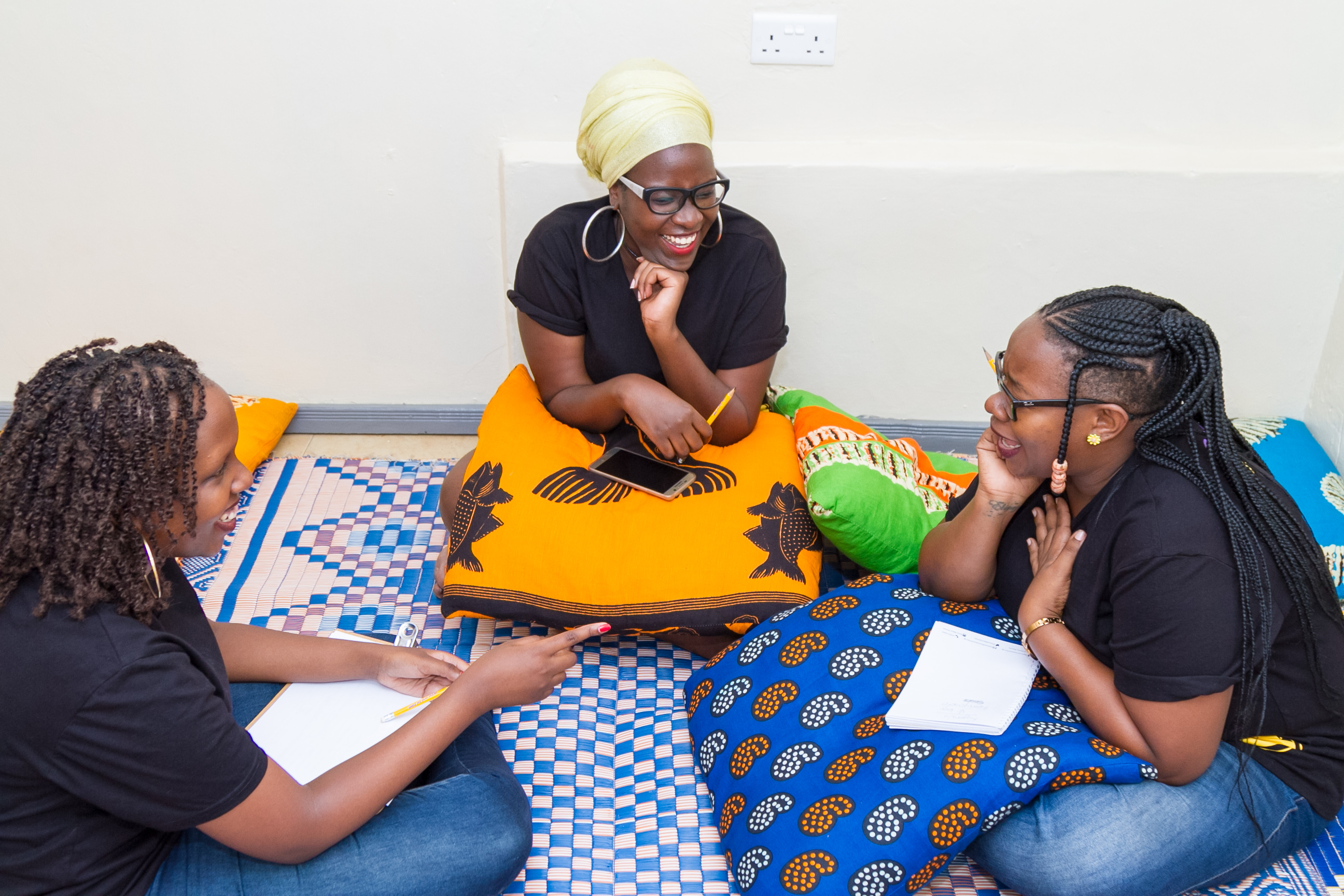 What were your expectations of Kyenvu going in?

Dushiime Kaguliro: First of all, I didn’t know that Kyenvu meant yellow. I though it meant bananas. Ripe ones.

Dushiime Kaguliro: (Laughs) You know when English is your first language, vernacular can play with you. But yes, from the clip Kemi put on Instagram stories I thought it was a love story. After watching Kawuna though, I figured it involved something more serious than ripe bananas.

Esi Nshakira: I heard someone say it’s about miniskirts and the miniskirt ban, so going in I knew that would be the point of discussion. The rape element I didn’t see coming. That was a shock.

Dushiime: What? That was the furthest thing from my mind.

Esi: Right? Because of the way she was promoting it on social, I think. When you see yellow and sunflowers, you think happiness and light, not provoking in anyway. I knew it was about miniskirts but beyond that I had no expectations going in.

Nyana: I got curious about it after Kawuna. ‘If she could do ALL THAT in a play, then the film must be lit’, I thought. I heard about the miniskirt thing, and my fear was that it was a common topic. What angle would she take that would make it surprising, or make you think deeper? She also mentioned during promotion that the film would be 18 minutes, and I thought, you’re going to talk about such a huge topic in 18 minutes? I wanted to see that.

Esi: I was also surprised at the length, because I hadn’t heard anything about it, I thought it would be like a feature film. But it was really impactful for something that was so short.

When it ended, what was the first thought that ran through your mind?

Esi: Will it ever be yellow again? I feel like it ended on such a tragic note. I think a lot of filmmakers use that as a tool, to effectively get their message across. But as she sat trying to wash the blood out of her skirt, I wanted to see that skirt become yellow again. I was heartbroken for her, and I just wanted it to be yellow again. Her skirt, her life, everything.

Nyana: So for me, when it ended, I thought, ‘Thank God it’s a short film’. It was sufficient. Everything that needed to be there was there. No unnecessary elongations. But also, I couldn’t watch that last scene longer than that. I didn’t have enough tears! I was also impressed that all that could be put into such a short amount of time. Because even the vibing scene is not too long; she used a technique of showing us progression through just the gifts the guy keeps giving the female lead’s character, no dialogue. That allowed us to build the story ourselves as opposed to films that completely build it for you. It trusted our ability to be clever enough to follow the story and create it for ourselves.

Esi: I was also really impressed with how much impact it had in such a short time. (Turns to Dushiime) We watched it twice, because some of her actors showed up a little late and they wanted to watch it from the top.

Esi: The second time round, I felt even more emotional. It seemed to hit a lot harder.

Can we talk about the taxi scenes? How authentic they were? That conductor that asked for dollars (as in? For heaven’s sake), the women mocking the female lead, the insults thrown around.

Dushiime: I can identify with the dollar charges! (laughs) There was once I was in a taxi and there was this Asian guy. He asked the conductor how much and then the conductor said eight dollars, and the guy actually pulled out the money. But of course, there are always those women! They shouted at him! ‘You, you’re the reason we don’t get tourists in Uganda!  The reason why we are poor!’

Nyana: I like it when people in the taxi gang up on the conductor for a good cause, but I also like it when they stand up for him. Like you know those passengers who decide to abuse the conductor, for no reason! And then the whole taxi is like, ‘Ah ah! Olimba!’

Dushiime: I so want to be bold enough to be those people! But my set back is I don’t know enough Luganda. But there are always those women, (who make me so proud by the way); a little older and savage with their words. They talk until the conductor fears or gets embarrassed!

Nyana: But eh, the conductors were so good! I thought they had gotten real conductors and yet they were actors! The setting was perfect, the jazz was on point. There was a line that killed me! One of the passengers asked; Tomanyi luzungu? And the conductor said ‘Gwe wansomesa?’

Dushiime: You know someone once said that a taxi ride is one of the best places to get content for a film, because you’ll always find so many interesting types of people!

The taxi scene also explores identity crisis a little bit. Kemi’s character has women mocking her accent, is charged in dollars and yet she identifies as Ugandan. She uses the same mode of transport as any other Ugandan. She’s in a place that should be home, but isn’t. What did you think of the exploration of this theme?

Esi: I related actually. Quite a bit! You know how sometimes you can go on bodas and a boda man will try and tell you it’s 15k, for a place that you know is 5k. And you’ll be wondering, why?

Nyana: I think sometimes it’s the language used. Like when I’m in Nairobi, I make sure I go to Maasai market with a Kenyan. Because then they bargain in Swa and the price actually reduces. And I think that’s everywhere, boda guys are probably easier to bargain with if you speak Luganda.

Dushiime: Shout out to Safe Boda! I’m saved that stress of bargaining. Before Safe Boda though, I was forced to learn Luganda. Enough Luganda to move around and shop downtown. For a long time, my friends would tell me to shut up because of my crappy Luganda.

Esi: And that’s the crisis I identify with. I’m not mixed, but I’ve been raised in a way that makes it hard sometimes for me to identify seamlessly with typical Ugandan culture. And yet I obviously don’t identify as Kenyan, even though Kenya is where I spent my formative years. Malaysia, where I studied is a no, for reasons we’ll get into another time. It doesn’t help that I don’t fluently speak any local language. So where is my space? Do I create one? Are there enough of us to form our own? I don’t know whether there’s an actual solution to this as problem, or even if it’s a valid problem to begin with, but yes. It all crossed my mind.

Dushiime: With the language thing, people will be quick to say why don’t you learn, but it’s hard trying to learn when your efforts are always laughed at. One of the reasons I stopped trying to learn Kinyarwanda is because whenever I’d try my aunties would always make jokes. So I just decided to stop bothering.

I totally get what you’re saying. I didn’t study in Bulaya but I can relate. But I think it’s a good thing in a way, because it forces us to be less Westernised, which is something I hope my children are not. Like for me for example, it forced me to learn Luganda.

Nyana: I think the place to start here would be:who is a Ugandan and whether there  is a need to define that. If you’re saying, if you speak a local language then you’re more Ugandan than someone that doesn’t, how many people are going to be left out? Especially now, when parents are not even teaching their kids the local languages.

Dushiime: And then there are also kids that grow up here in Kampala, in the Central region. An Atukunda who is fluent in Luganda, but take her to Kabale and she can’t speak a word of Rukiga.

Nyana: And in Kabale people will look at her like, ‘What the hell? Where are you from?’

Esi: So as Atukunda, will that take away from her identity as a Mukiga? I think it’s also about self- discovery? You discover for yourself what your identity actually is. It doesn’t have to be spelt out from the beginning. You figure it out as you go along.

Dushiime: Also people can identify as more than just one thing.

What was your most memorable scene?

Nyana: Definitely the taxi. It felt so real! I felt like I could have been in that taxi.

Esi: I really liked the wooing scene. The way he would bring her gifts and she started softening up. I loved the sunflower themed gifts. The entire loop of scenes was adorable. And that was when they played Muliro, which I absolutely love! So yes.

Nyana: I also liked the scene when she was preparing for the date. It felt like something every girl goes through. You go through 20 outfits before you finally choose one, turn all sides in the mirror, arrange your boobs, do a little ka dance before you leave. So relatable!

Dushiime: And then the boy just wakes and smells a shirt and wears and shows up for the date.