Harriet Anena is no doubt, currently one of the most talented poets in Africa. The various accolades under her belt, the most recent being the Wole Soyinka Prize for Literature in Africa, are evidence of this. What truly makes her stand out though is her grit and resilience. She is a hard worker. Plain and simple. And she understands truly what it means not to give up. Anena has been accepted to Columbia University, for an MFA in Creative Writing and is currently fundraising for the course that starts in August 2019 with a GoFundMe page and a poetry and music experience on the 28th, 29th and 30th of June. It has been a dream of hers for a long time to attain the knowledge and skills that come with the course, and it is one that is close to being a reality. I sat down with Anena to learn a little bit more about her poetry journey, Columbia University and her performance.

Anena, from a very young age, loved writing. First published in 2003 at the age of 17, she knew that books, words and storytelling were her thing. However, even after doing literature all through high school, she still felt there was something missing. The Ugandan Literature curriculum supports the reader more than it does the writer and for someone like Anena for whom writing had, from the beginning, been a catharsis of sorts, it was a slight disservice. “In O’ level and A’ level I never had a chance to write a piece of fictional work as part of the course/examination,” she explains, and yet for her, writing was the way in which she discussed issues pertinent to her, particularly the area of poetry. Going on to study and work in the area of Communications and Journalism, there wasn’t a lot of opportunity to study creative writing in a professional setting. She has received some training through workshops with organisations like African Writers Trust, Short Story Day Africa and StoryMoja, where she has a teen novel coming out soon. Still, the amount of exposure and skills acquired from a creative writing course would be invaluable. The MA would therefore be her weapon in the battlefield that is writing. “A lot of young writers who have not been able to study creative writing are hindered because of that lack of exposure,” says Anena.

As a poet in Uganda there have been many hurdles that Anena has had to jump. One of them was finding an editor for her for her book, A Nation in Labour. “There are few people here who have studied editing or who have edited creative writing professionally. That was the main challenge. A lot of times, I relied on more experienced writers to look through my work. Because I was self-publishing though, I still felt I needed someone professional , who I was only able to find in Nigeria,” explains Anena.

Another issue for her has been the misconceptions about poetry as a whole. A lot of Ugandans assume poetry is for a different kind of person. It is either assumed to be for the elite, for those that are able to wrap their minds around the ‘difficult’ form of writing, or at worst, it is not considered a solid enough form of writing. “People often ask me what I write and when I say poetry, it is quickly dismissed by the question of when my novel is coming out. Even after I got the Wole Soyinka Prize for Literature the question still remains; where is the novel?”

The problem with these misconceptions is when people say them often enough, they begin to feel true.
Anena was incredibly surprised at how well A Nation in Labour did mainly because of the assumption that people in Uganda and Africa do not buy books, let alone poetry books. At only four years old however, the poetry collection is on it’s sixth print run with copies being sold here in Uganda, Kenya, Nigeria and on Amazon. “I think for the artist the challenge is to see past the noise and find ways to work around the hurdles: deliver books on a boda boda, do performances and public readings, do collaborations. Work around the hurdles.”

Although her advice to young writers includes performing, Anena never really saw herself as a performer. It wasn’t until 2016 when, with help from Peter Kagayi, fellow poet and performer and Acaye Pamela, producer, director and performer, that she began to warm up to the idea. She held a production dubbed I Bow For My Boobs to a captivated audience during the Writivism Festival in the same year. The performance scheduled for the last weekend of June this year will be her third since then.

“Harriet Anena has stood out for me since I first met her several years ago. She has an unexpected onstage persona that is only given away by the twinkle of mischief in the eye of the quiet woman one meets off-stage. A twinkle one soon learns the meaning of when she performs her work. It means humour, it means power. Anena is a feminine force of nature that takes no prisoners. Feminist. Scathing. Sensitive. Sharp. She has no blurred edges. Her prose is not like a knife, it is the blade that cuts into the patriarchy and incises its scars from the female body.” -Rachel Zadok | Short Story Day Africa Founder

When it comes to her creative process, it is clear that her work within the journalism space, previously at The Monitor and now at ACME, heavily influences her poetry. Her title poem for example, A Nation in Labour was written in 2012, based on the OPM scandal involving theft of donor funds meant for Northern Uganda and Amama Mbabazi’s statements during that time, especially in light of Uganda’s then pending 50th year of independence.

From her first collection, it is evident that Anena’s work leans towards politics. “In all my work there is always an aspect of politics because I believe that all of life is political. Even when you are looking at a situation where a man beats up his woman everyday, that is politics; power play at play,” she explains. When she had just started writing, because of her background, growing up in northern Uganda during the LRA insurgency, all her work tended to be about the war. She still continues to tackle the gender dynamics in post war Northern Uganda, mental health within that context and the action and inaction of  the government during the war. She writes about these themes outside of the war context as well, exploring things like the place of a woman in society, power dynamics and mental health in modern Kampala.

As someone passionate about gender dynamics and conversations exploring the woman and her place in society, it’s not surprising that her biggest literary influences are unintentionally all women. Included in the list is Safia Elhillo, a Sudanese poet and spoken word performer, that she had the opportunity to meet and share a stage with on a recent trip to Berlin for the Berlin Africa Book Festival. She also deeply admires Jennifer Nansubuga Makumbi and how authentic her work is. “She is unapologetic about how she uses English, how she localises our englishes and keeps the Ugandan-ness in her work. Manchester Happened is a true reflection of that unapologetic nature. There is always the temptation to sanitise your work, especially when your publisher tells you you might alienate a certain audience. So if as a writer you find your place and are able to stick to it past the noise, it’s something I admire.” Anena also admires Warsan Shire and NoViolet Bulawayo.

“Daring and innovative, Harriet Anena is well on the way to become one of the most important poets to come out of Africa in the last quarter of a century.” -James Murua | Blogger & Journalist

Anena’s performance, fundraising for her studies at Columbia University, will be a collaborative one with Gladys Oyenbot and Amaru, both talented songstresses and Peter Kagayi, a poet and performer. The performance will be based on poetry from A Nation In Labour and two other unpublished collections of poetry by Anena. “For me it’s more than a performance, it’s about questioning the different issues that run through my three poetry collections.”

The performance will be split into four parts. The first, The Strangeness of Home, will highlight some of the atrocities that occurred in Northern Uganda and bring to the forefront a conversation that might be uncomfortable but necessary. In Set Me on Fire, Anena looks at politics through the lens of the female form: a piece of political erotica. The Last Supper, segment three, will explore the idea of a normal man as Anena understands it; a man who is not forced by society to adhere to certain parameters of masculinity, a man who is not afraid to cry or express how he feels in public. The final segment will be based on poems mostly from A Nation In Labour and will question the politics of the day, the complacency of our leaders and us as voters, the hopelessness and the hope and the idea of what lies ahead.

Let’s come together storylovers and make this happen for one of our Tribe. If you would like more information on Anena and her cause, head over to her GoFundMe page, read and donate if you can. Come by the National Theatre on either 28th, 29th or 30th June at 6pm and support Anena while you enjoy a thoroughly engaging performance. See you then? 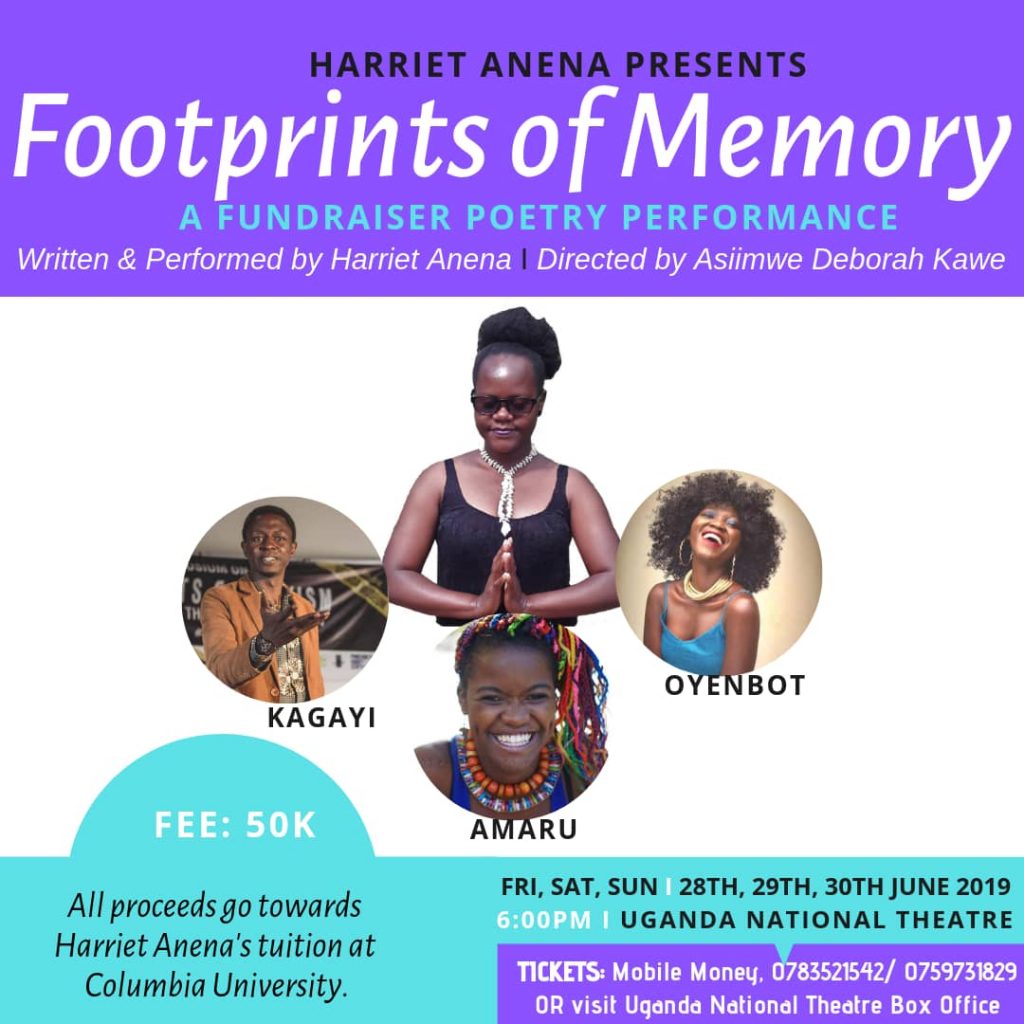