Abigail Arunga is a freelance writer by profession, she has self-published two poetry collections (Akello and A Side of Raunch), is a regular columnist in Kenya’s Daily Nation, co-hosts a Youtube talk-show with Onyango Ayany – Y DoWeDoIt – and manages The Magunga Bookstore together with Magunga Williams. And oh yes! And she is the vibrant mind behind akello.co.ke, her personal blog and the reason for her feature on our #MoreThanABlog series. We managed to catch up with Abigail and discuss her position on self-publishing, her Youtube show and lot’s more. 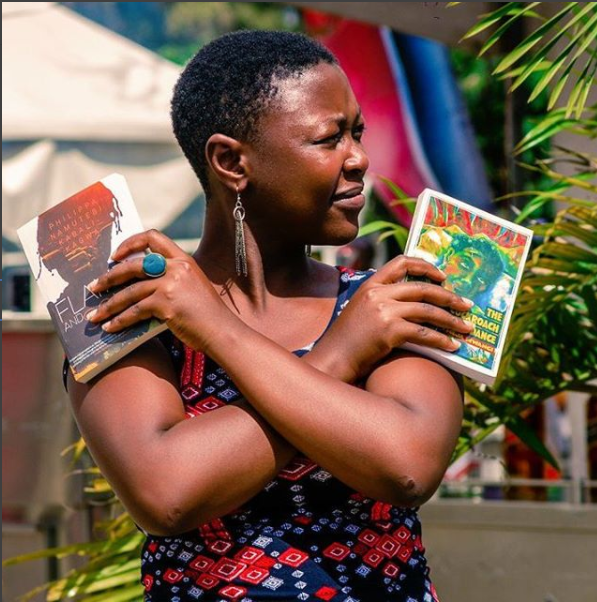 When did you realise writing was big part of who you are?
At like five, to be honest. I was always a pretty artistic child. I liked it all – writing, reading, consuming art, producing art. Painting. Papier-mâché. Dance. You name it. I got worse at everything else, and better at writing.

You have self-published two books. Why the decision to self-publish?
Because publishing houses in Kenya can tell you a lot of bullshit about why or why not they will or will not publish your book. I was told so many silly reasons, and so I decided, ‘I don’t actually need this. I can actually…just…print it myself.’ It helped that my cousin had years of experience in publishing, so he did everything I couldn’t do. His name is Ian, he’s a stellar graphic designer with his own firm. He’s designed both my books. So, silly reasons like – no one reads poetry. Or, you have to perform so people know you so people buy your book; my first book sold out and I suck at performance, but I am kind of trying to work on that. Or, we’ll give you three per cent of your earnings. Ha! No, sir!

There’s a thread I read recently on self-publishing and it’s place in literary circles here: El Nathan John on Self-publishing | A twitter thread

What is your response to people that rank self-published books lower than traditionally published ones?
First of all Elnathan is hilarious, and second, I wouldn’t have it any other way. I understand the stigma of traditional publishers. I get that you feel recognised and appreciated when someone (other than yourself and your friends) think that you can write. But in Kenya, I don’t think the majority of publishing houses are at the point where being picked by them means you’re actually a good writer. They still tell you nonsense like ‘you have to have a moral in your story.’ Does that sound like someone who is interested in the next great African novel? Of course not. They tell you we will edit the book. They do nothing except make it grossly commercial. They say, we’ll advertise and give you publicity. Meaning a small post, once, on their Facebook. It’s ridiculous. They’re actually not doing anything, and don’t particularly care for you if you aren’t writing a textbook. So, no thank you. And as for looking down on the others – that makes no sense. I’ve read equally terrible traditional and self-published books. If you’re looking down on me, at least do it with a magnum opus that isn’t hiding behind a publisher’s skirts of mediocrity.

After self-publishing twice, would you consider traditional publishing?
Maybe. If the deal was sweet enough. But what deal is sweeter than me keeping 100 per cent of my profits? It’s a pretty hard sell. I would consider it. Why, are you guys offering? Heh heh.

Haha! For you? We might consider breaking our ‘Ugandan authors only’ rule.
A Side of Raunch is quite…raunchy. What made you decide to venture into erotica, given the conservative mindset we still seem to be fighting in a lot of African countries?
Rrrrrrrrr. Errrrrotica. I like sex. Not even in the way that everyone immediately thinks of (pornos, or scenes from The Bold and The Beautiful that your parents switch off immediately as soon as Brooke gets that look in her eye) but on an even wider scope. It’s a natural thing to talk about. Everyone’s thinking about it already. What to do. When to do it. Whether to not. How to hide it from your mother. What contraception to use. How guilty you feel in church. Historic contexts of how Africans think about sex and the fact that it really wasn’t that big of a sanctimonious brouhaha before the Christians got to us. What that feeling means and why the word slut is still existent in the English language. It’s an interesting topic. It’s a natural topic. For me, anyway. I didn’t really have to think about it, because talking about sex comes pretty naturally to me. Please don’t tell my mother. (She tried to read the first book. She really did. I haven’t shown her the second one. I want to stay alive.)

What has been the reception of A Side of Raunch? Particularly here in Africa.
So the upside of self publishing is that you get to do and keep everything for yourself. The downside is, you get to do and keep everything for yourself. You’re the one finding the editor. You’re the one negotiating prices. You’re the one going round to bookstores begging them to stock you (and in some cases, this results in the founding of your own bookstore instead because bureaucracy is an incredibly boring minefield). And you’re the one marketing. Distributing. Advertising. Forcing your entire family to buy two copies. It can be quite exhausting. So for the first book, I did all of that for two and a half years straight – which is how long it took me to sell out. With my second book, I was like, ah, f**k it. I’m tired. If it sells, it sells. If it doesn’t – for me the point was to put it out. The money is always nice, but with the second book, it was secondary to the art. The next one, though, I want money!

So that is a roundabout way of saying I don’t actually know how many books I’ve sold, with the second book. I check every six months though in case someone is supposed to pay me, heh heh. So perhaps…100? Maybe less? Lol, ok, at least 50.

Do you see yourself writing anything besides poetry and journalistic articles? A book perhaps?
A book might be fun. No, I’m lying. A book might be torturous. Writing is torturous, so I don’t see why a book would be any different. I am trying, to, however. You must buy it.

What kind of book are you thinking of?
Something lovey dovey with a bit of sex in it, obviously, heh heh. If it isn’t broken, don’t fix it.

As a reader, what makes you committed to reading a particular blog?

Content and layout. I hate bad looking layouts that look like the logo was created on Word Art circa 1995. Ugh. Bad grammar is a turn off. Lack of knowledge is a turn off. Basically the same things that keep me reading books.

What advice would you give to someone starting a blog? How do you get your voice heard?
Be consistent and get an editor, perhaps a stalker who’s  grammar Nazi to read through your posts so that they’re actually good. Advertise. Force people to read it and then after a bit they’ll be reading anyway. That’s how I got my first job. I know it looks like I force people to do a lot of things for me – design my books, buy my books, read my blog. I wish it wasn’t true, but apparently this is who I am as a person. LOL.

What inspired your YouTube show Y DoWeDoIt?
Wow. I love my co-host Onyi. We always have great conversation and I don’t know if you’ve noticed but he’s hilarious. We’ve always lived quite close to each other and went to the same uni, which is where our rapport was created. So one day we were sitting in the house, and he had a camera, and I had an idea, and so we shot our first episode. We wanted to be unfiltered, which again, traditional methods wouldn’t let us do (I cuss a little), and they wouldn’t let us talk about things we wanted to talk about, like consent, and #MenAreTrash, and sex myths, and How to Cope With Grief, and Why Morning Breath is a true sign of love, and boarding schools, and mental health, and so on, and so forth…

What are you looking to achieve from the show?
Openness. Discussion. A few laughs. A sponsor. I kid! I’m not kidding. Give us money.

Is TV and show hosting something you’d like to pursue?
Oof. No. Sounds like pressure. They have to put on make-up (which I never do) and think about their wardrobes (which I rarely do) and have nice hair (which I couldn’t care for) and be politically correct (a laborious task) and be judged by millions of people. It sounds hard.

Dinner for five. Who’s on your table?
You know, had you asked me this like f years ago, one of these people would have been Bill Cosby. Sigh. I’ve always loved his shows, and the shows he span from The Cosby Show like A Different World, but…now I just can’t do it. It’s so sad that his legacy is now so deeply tainted. I also would have said Michael Jackson, but I don’t think I would be able to handle that. You know how you can’t meet your idols because it might ruin it? I don’t want meeting MJ to ruin MJ for me. I still cry when I read a really good think-piece about him or listen to like three songs in a row. I don’t think I could handle him in person. Another person I would have said was Roald Dahl, but again with heroes and meeting them…you see, he was a Nazi supporter and actually, from all accounts, a bit nasty, so who would want to have dinner with him? Ok so now I have no idea. So, perhaps Jesus, because I feel like everyone got him wrong and humans are just being petty about what he actually said.  I should have probably started thinking about this earlier. Ask me after my next book comes out!

Thank you so much for taking the time Abigail! Continue to inspire. 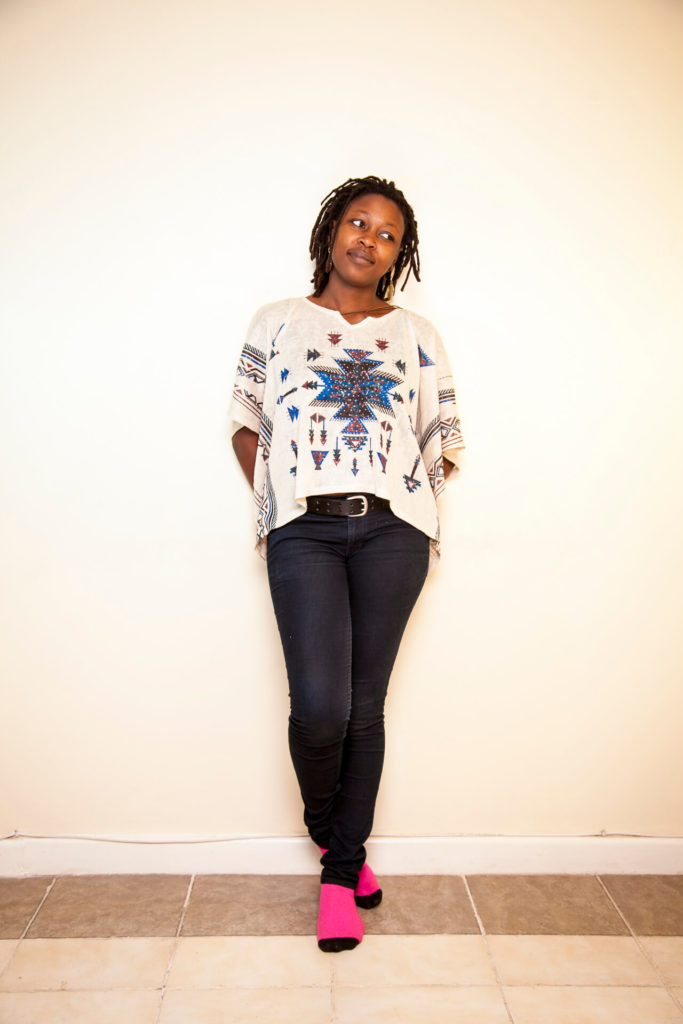 #MoreThanABlog is a series we are running, highlighting all the incredible people in our blogging community that are going the extra mile and doing more than blogging. ‘The extra mile’ could be in direct line with their blog and that content or within a completly different sector. We are just looking to celebrate all the bloggers doing more and inspire every writer out there to find ways in which they can do more than blog. If you think you fit the bill or know anyone that would, get in touch at esther@somanystories.ug.