The Lantern Meet Of Poets is a creative community that makes lovers of words like me happy to know them. They started as a community of poets and poetry enthusiasts seven years ago who met occasionally to read poetry to each other. The community grew as members invited more of their friends who enjoyed poetry. They have staged 12 productions over the seven years for the Lantern Meet, and over 15 in schools over the past three years. They have published two poetry anthologies: Gathering Grains of the Wind and Broken Voices of the Revolution.

A couple of years ago, Lantern Meet Of Poets started going out to schools and looking for younger writers that were interested in poetry. Sooo Many Stories is delighted to partner with Lantern Meet of Poets to bring you some of these poems that they have discovered along the way. The poems will be featured in our new series #SoooManyLanterns starting tomorrow.

I met with the President of the Lantern Meet of Poets (or the Lamp as he is referred to), Peter Kagayi Mutanga and he tells us more about this inspiring project.

When did you start going to schools and what made you want to go there?
We started in 2009 but the idea was a bit fuzzy. Later in 2011 we rolled it out again. We knew what we could offer to the younger generation if given chance to nurture them into writers and performers. We wanted to make creative writing fun, pragmatic and a reality of life to them.

But student culture travels fast and add to that their nature of competitiveness and you have the culture of poetry trailing in more schools. So there are schools we have not been to but the poetry culture has already been started by teens who “do not want to miss out”.

What exactly do you teach these students? Writing? Performing or both?
We teach the students how to write, critique, recite and publish poetry, how to organise poetry recitals, leadership and the art public speaking. We also teach them how to answer questions in their various classes and subjects.

What’s the process like? Do you follow the same procedure of production as with Lantern Meet or do you do something else?
Each school has its own culture so we tether the project according to the school social fibre. For example boys respond to a certain kind of poetry, while girls have their own preferences. A single-sex school cannot be approached like a mixed school, neither can a day school like a boarding. Add the social aspects: Ivy League schools have different approaches too. But everywhere we maintain the Lantern Meet standards of poetry critique (the circle, anonymity of writer, the trim critique, the scheduled meets et al), poetry quality, structural organisation and poetry recitation.

What shocked you about the kind of work that you received from the writers?
It was at Nabisunsa that the project took ground. We were not shocked, but rather surprised out of our wits by the level of conscientiousness. The girls took their writing seriously and many had poems scribbled in diaries and exercise books. In fact some even had poetry collections. After the first three months, we were astounded by the response to the project that we had to devise mechanisms of keeping them interested throughout the year.

What we finally realised was while not everyone can be a good writer, a good writer can come from anywhere. The students who recited became excellent entertainers, at times even outperforming the Lantern Meet. The writing became better with time. Some students have already become professional writers in media houses around Kampala. They became that good.

You have helped some of these schools stage recitals. How much help do you give?
We give our all. We take the school productions as if they were our own. The administrations are kind enough to let us help but with time we teach the students to organise their own shows. Now the students of Nabisunsa and SMACK mostly do the work. St. Mary’s Kitende is the cherry on the top; the students we worked with last year from three different schools found themselves together early this year and started a writers club in Kitende. They met to critique each other’s poetry, organised a poetry show and later contacted us to help them with establishing vision, purpose and, of course, to recite for them.

What challenges have you encountered with this outreach programme?
The biggest challenge has been the initial adjusting to the demographics of a community and them adjusting to us. All communities respond to us differently. What the project thrives on more than anything is trust; of the student, administration, parents, theatre, the Lantern Meet audience and mostly, us that can make it.

In some schools it took more time. In Nabisunsa we were accepted almost right away; Gayaza took two years; SMACK took over six months; in Kitende our reputation preceded us, as was in St. Lawrence, Turkish Light and Vine Christian International. In Budo, we were first rejected because we did not want to get paid! It was suspicious.

The biggest lesson we have learned can only be surmised in one quote: “it is easier to build stronger children than repair broken men”.

What the challenges of these younger poets? What are their fears? And what are some of the things that, knowing what you know now, you always make a point to teach them?

Forgive the hyperbole but OhMyGod there are many broken families! If only society knew! The students eventually gather the strength to face the truth and share it, but it is easy to see most of them do not know “why a caged bird sings”. They do not know how to interact with their parents beyond the obligatory response to their orders, they hardly know how to deal with emotions, thoughts, logic, and are abjectly ignorant about their own heritage. Their fears range from mistrust, ignorance of the world and fear of the unknown, the lack of ambition, the school system (jail, as some students in a given school call it) and mostly how to live well around their own parents.

We share with them a lot that we did not know at their age. Before we get started with the poetry we make it a point to teach them the basic concepts of logic, thinking, listening, reading, culture, anatomy, ma’at (truth, balance, law), arithmetic, astrology, the history of their own country, school community and family lineages, among other things. We also encourage them to read widely, buy newspapers daily, purchase novels and share them with friends. We also share our personal views on these matters with them. The order and choice of scheme is determined by a given school’s demography.

Tell us about the Rhymers Poetry Club. Was that started by you (Lantern Meet) or the poets themselves?
The Rhymers is a club of writers, performers and poetry enthusiasts that was started by the students of Nabisunsa themselves. They chose its name, colour and symbol too. Initially the school Administration was against the idea that there should be a poetry club with the reasoning that they should be catered for under the Writers’ Club. But the impression the girls made on the administration -the numbers that joined (at times we could have a circle of over 50 for a poetry meet,) and the reputation it was consolidating outside (the parents were left in awe of the discovered talents of their children)- left the Administration little choice but to let the girls nurture their own entity. But the club’s structures are those of the Lantern Meet.

The membership is not only restricted to students of Nabisunsa. Some of the founder members moved to other schools and initiated poetry clubs in schools like Gombe S.S.S., Kibuli SSS, Hawa S.S.S. Tthere are Rhymers who are not students of Nabisunsa and have never stepped there but e-mail their poetry to the club for critique and it is sent back to them. In the other schools, the poets are categorised under the school’s writers’ clubs.

Tomorrow (December 5, 2014), there is a poetry show called A Verse In Vac by St Mary’s College Kisubi and The Rhymers of Nabisunsa. What do we need to know about it?
A Verse in Vac is as the title suggests. Students in vacation who enjoy poetry recitation decided to organise a poetry show. It is a combination of Nabisunsa Girls School and SMACK poets and reciters. The Lantern Meet and Uganda National Center for Culture (UNCC) are just playing the role of mentor. Otherwise it is mostly their effort. 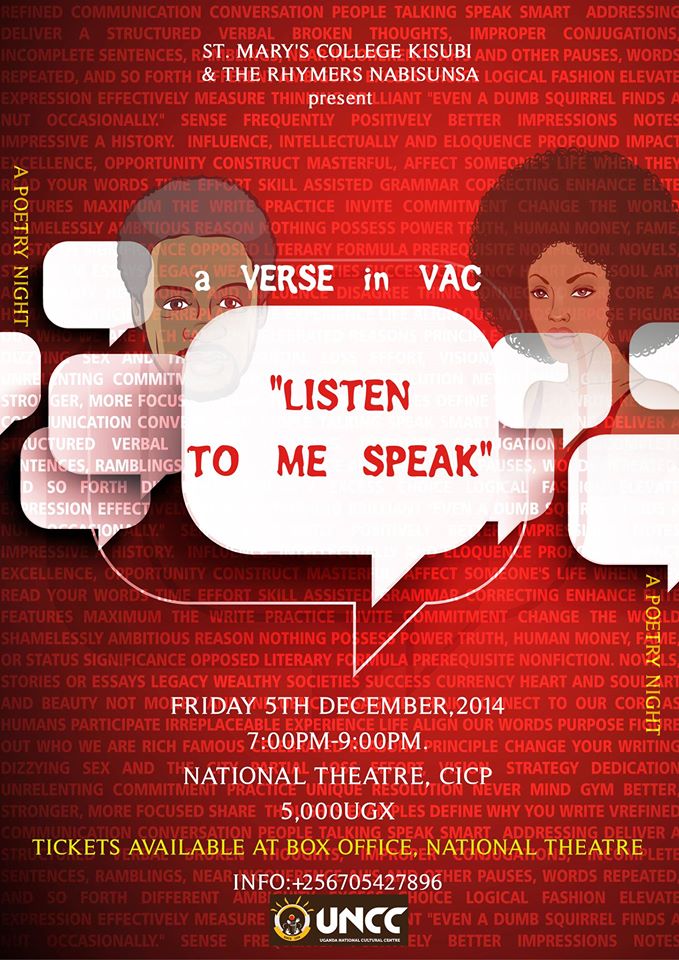 Starting tomorrow, look out for some great poems from the people that have been so ably nurtured by the Lantern Meets of Poets in our new series #SoooManyLanterns. Pass by the National Theatre on Friday and have a glimpse at what the future looks like.