The Luganda Poetry Workshop kicked off with introductions and welcoming remarks from one of Uganda’s finest Luganda poets, Nakisanze Segawa, but unlike any of the other past events, it was clear that the mode of communication was different, all messages and conversations were packaged in Luganda, the commonest local language in Uganda. Nakisanze introduced Babishai; highlighting that from inception in 2009, Babishai awarded Ugandan women poets through an annual competition, promoting and expanding platforms for publishing and performance. Nakisanze is a 2010 Babishai award-winning poet who has since published a novel titled The Triangle which tells a story of a kingdom on the verge of losing its independence.

The workshop facilitator, Lule  Ssebo Lule, took to the stage to speak about the origin of poetry (ebitontome) in Buganda and how it has continued to manifest in all aspects of our lives, still buried deep in our roots.

Ssebo Lule described poetry as a wonderful play of words or sentences with a hidden meaning and that has rhythm, lovely to the ear. He gave examples of traditional sayings and proverbs, songs, clan anthems, lullabies and children play-songs. Even though not many people think of them as poetry, they are.

Luganda poetry makes use of techniques (entunnunsi) similar to those in English. For example, the repetition of certain words and sounds (okuwaawaanya), similar end of word/sentence  patterns, freestyle (no clear pattern or a mix of styles), fables (enfumo) which is the use of animal characters, and the use of dialogue.

Majority of poetry in the past was mainly created for the amusement of the royal family, as well as to preserve culture through constant re-education of the children, It was also used to express the way in which the Baganda perceived different aspects of life. Some of this traditional poetry was actually used to hide and obscure messages like when adults spoke amidst children but didnt wish for them to understand and also in war times, for the same reason against enemies.

Nakisanze and Ssebo Lule then recited some of the work from their collections; demonstrating the different styles of wordplay that exist in the Ganda vocabulary. Even those  who did not understand the Luganda language still enjoyed the songs, vivid demonstrations and transformation of the poems into life.

Nakisanze performed some politically-sensitive poems that she had only performed once. She attributed this to the audience reception and post-performance comments. She however called upon poets to be brave and take risks because poetry is one of the avenues to address social-political matters.

Ssebo Lule then stressed how just anyone could make a living through Luganda Poetry; citing examples like making music, cultural or poetry audio books, Selling your own poetry & performances, story writing, Radio &TV announcements, and emceeing at traditional events among many others.

The tables soon turned and the audience that was charged with creating short 5 – 10-verse poems in short 15-minute breaks. They then had to recite them to demonstrate how just anyone can be a poet.

As Ssebo Lule concluded the program, he addressed the matter of poetic license (olukusa lw’omutontozi) which he said allows the poet to achieve their poetic goal without necessarily observing grammatical or poetic rules. For example, linking words in different verses or even by cutting the words shorter and using jargon, the intentional imbalance of sentences / word length between verses, borrowing words from other languages; especially when there is no alternative / matching word, and the intentional imbalance of stanza length can also be excused due to poetic license.

The Baibishai Niwe poetry foundation will be celebrating 10 years on the 25th of March! We are so proud of all the good work they have done in the poetry space and are looking forward to what else they have in store! 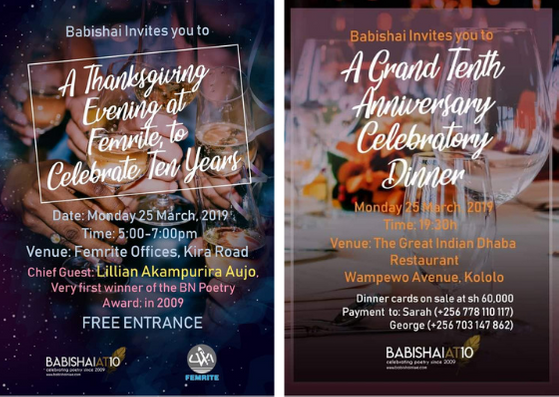